Chicago: History was made on Wednesday at the White House as leaders from Israel, the United Arab Emirates, and Bahrain met with US President Donald Trump and signed the “Abraham Accords”, aiming to normalize diplomatic relations between Israel and the two Arab nations.

This paved the way for Saudi Arabia and other Arab nations also joining the drive for possible normalization of relations with Israel.

Earlier, only two peace deals involving Israel had been negotiated in the last 72 years, with the most recent one coming in 1994. During the past month alone, President Trump has helped broker two such agreements.

“Today the world sees that these nations are choosing cooperation over conflict, friendship over enmity, prosperity over poverty, and hope over despair,” Trump said.

“They are choosing a future in which Arabs and Israelis, Muslims, Jews, and Christians can live together, pray together, and dream together.”

“After decades of division and conflict, we mark the dawn of a new Middle East,” he said.

The first steps between Israel, the UAE, and Bahrain are an exchange of embassies and ambassadors, as well as the start of direct commercial flights between these countries.

Their respective leaders spoke about the significance of Abraham Accords in the pursuit of enduring peace in the Middle East.

“This day is a pivot of history. It heralds 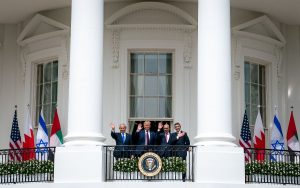 “Peace requires courage, and shaping the future requires knowledge,” Abdullah bin Zayed Al Nahyan of the UAE said, adding “We have come today to tell the world that this is our approach.”

“Today is a truly historic occasion—a moment of hope and opportunity for all the peoples of the Middle East,” Abdullatif bin Rashid Al-Zayani of Bahrain said.