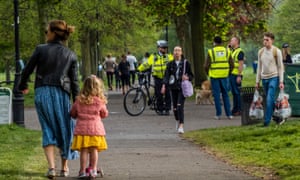 NEW DELHI, Nov 1: Even as most parts of Europe are reeling under a heavy second wave of Corona cases and the United Kingdom declaring yet another month-long lockdown, India on Sunday continued to report a trend of steadily declining active cases and for the third day running registered less than six lakh active cases, first time in three months.

A union health ministry statement said since the active cases dropped below the 6 lakh mark after nearly three months, the progressive decline had been maintained. Presently India’s total active caseload was 5,70,458. The active cases have dropped to only 6.97% of the total positive cases of the country demonstrating a steady falling percentage of the total cases, the statement added.

In London, British Prime Minister Boris Johnson announced a month-long lockdown for England till December 2. Pubs and restaurants will shut unless serving takeaway food, while all leisure and entertainment venues and non-essential shops will close. Schools will, however, remain open during the month-long lockdown. People will only be allowed to leave home for ‘specific reasons’. The ramped-up response comes as Britain surpasses one million cases. Britain recorded nearly 22,000 new infections on Saturday alone. Data showed that the Covid-related deaths in Britain rose by 326 to 46,555.

The lockdown announcement came even earlier than expected as cases continued to surge. The British government was reported to be contemplating to impose the lockdown from next week but the prime minister did not want to wait even a day longer after Friday recorded more than 24,400 new cases and 274 deaths.

After new expert modelling showed a greater number of deaths and cases than the March lockdown, the Boris Johnson government started considering another ‘fire-breaker’ lockdown for a month joining similar measures across Europe.

The second lockdown is imposed in England, the largest and most populated constituent of the UK, with local lockdown and tighter restrictions already in place in Wales, Scotland and Northern Ireland.

Johnson has so far resisted the lockdown option, implementing a three-level alert level with varying degrees of restrictions regionally in areas with spike in new cases to ensure some areas of the economy continue to function. However, experts and the opposition Labour insisted the regional approach had not been effective.

Experts said the virus was now “running riot” across all age groups. The UK’s cumulative death figure of 46,229 is the highest in Europe. Latest modelling of deaths by experts at five centres, including at Imperial College London, University of Warwick and the University of Cambridge showed at least over 2,000 deaths per day – more than twice the peak earlier this year – by December, if lockdown was not imposed. One of the models envisaged 4,000 deaths per day.

Epidemiologist and government advisor John Edmunds told a section of the media that the only way to have a “relatively safe” Christmas was to take “stringent” action now, while another advisor, Calum Semple, added that another month-long lockdown would bring new cases down dramatically.

Semple said: “Unlike the first wave, where we had a national lockdown which protected huge swathes of society, this outbreak is now running riot across all age groups.”

France, Belgium and Germany have already imposed tighter restrictions as the second wave of Covid-19 sweeps across Europe.

With increasing number of recoveries, the  gap was continuously widening. The higher number of recoveries had aided the national Recovery Rate to further improve to 91.54%. In the last 24 hours, 58,684 had recovered and discharged whereas the new confirmed cases during the period were 46,963 while 470 fatalities were reported from all over the country.

previous No Further Relaxations in November from Centre, Mumbai May Allow Public to Board Local Trains in Non-Peak Hours
next M S Dhoni to Play for CSK in 2021 Season Too
Related Posts