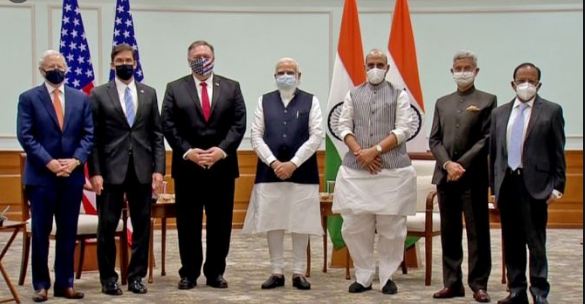 New Delhi: It took the North Atlantic Treaty Organization (NATO) four years to take shape (1945-49) against the aggressive Soviet Union. But an ‘Asian NATO’ may become a reality in less than a year, this time against a recalcitrant China.

The four members of the Quadrilateral Security Dialogue (Quad)—the US, India, Australia, and Japan—are actively giving shape to full-fledged defense cooperation, also known as the Asian version of NATO, at a time when the original NATO has lost some of its sheens. The US has invited China-threatened countries to join the new emerging security club. The countries likely to join soon include Taiwan, Vietnam, Myanmar, and Indonesia. Others may follow.

The first step towards the formation of this security club was taken on Monday with the US and India signing a crucial Basic Exchange and Cooperation Agreement (BECA) pertaining to geospatial intelligence, sharing information on maps and satellite images for defense purposes. Simplified, BECA is the first step towards comprehensive military-to-military cooperation between the two largest democratic countries. Australia and Japan are also likely to become founding members of the security group of democracies soon.

Before inking BECA on the second day of their visit, US Secretary of State Mike Pompeo and Secretary of Defense Mark Esper held the third edition of a ‘2+2’ ministerial dialogue with their Indian counterparts External Affairs Minister Dr. Subramanian Jaishankar and Defence Minister Rajnath Singh.

Later, Singh asserted protecting territorial integrity and sovereignty of India: “We held a comprehensive discussion on a range of key issues. Inking of BECA with the US is a significant move. Our military-to-military cooperation with the US is moving forward very well. We identified projects for the joint development of defense equipment. We reaffirmed our commitment to peace and security in the Indo-Pacific region.”

Esper was more forthright when he referred clearly to the increasing aggression and destabilizing activities by China. Pompeo cited the Galwan incident where 20 Indian soldiers were killed due to Chinese aggression this year.

“We visited National War Memorial to honor brave men & women of Indian armed forces who sacrificed for the world’s largest democracy, including 20 killed by PLA in Galwan Valley. The US will stand with India as they confront threats to their sovereignty, liberty,” Pompeo said.

“The US and India are taking steps to strengthen our cooperation against all manner of threats & not just those posed by the Chinese Communist Party. Last year, we’ve expanded our cooperation on cyber issues, our navies have held joint exercises in the Indian Ocean,” he added.

The BECA enables India to use US geospatial intelligence and enhance the accuracy of automated systems and weapons like missiles and armed drones. It also gives access to topographical and aeronautical data and advanced products which will aid navigation and targeting.

This could be the key to Air Force-to-Air Force cooperation between India and the US. The cooperation also includes sharing of high-end satellite images, telephone intercepts, and data exchange on Chinese troops and weapons deployment along the 3,488-km India-China LAC.

According to reports, the stage for this high-level cooperation was set by the conversation between Pompeo and Jaishankar in June, after the June 15  Galwan incident in Ladakh, and gave a political impetus to the already existing security cooperation apparatus in place. Also, Esper had called up Rajnath Singh in mid-July.

“Today’s discussions will add new vigor to India-US defense relations and mutual cooperation,” Singh tweeted after his meeting with Esper. The US Defense Secretary was received by Singh for the ceremonial tri-services guard of honor.

The talks, Singh said, were “aimed at further deepening defense cooperation in a wide range of areas.”

MEA spokesperson Anurag Srivastava said Monday that the 2+2 dialogue has been “significant in propelling India-US ties forward”. The first edition of the dialogue took place in Delhi in September 2018, the last one was in Washington in December 2019.

In 2020, however, the Chinese aggression has only alerted the two countries to take their cooperation faster and farther.