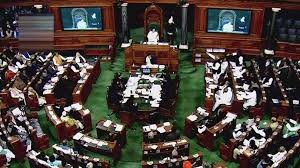 NEW DELHI, Sep 20: Amidst total pandemonium with the opposition members even rushing to the well of the House and tearing of official papers, the Rajya Sabha on Sunday passed through voice vote two contentious agricultural bills that the prime minister Narendra Modi described as the “watershed moment” but had been opposed by many farmers’ organisations and several non-BJP political parties including some allies of the ruling NDA. The bills replace two ordinances promulgated on June 5.

The bills, The Farmers Produce Trade and Commerce (Promotion and Facilitation) Bill, 2020; and The Farmers (Empowerment and Protection) Agreement on Price Assurance and Farm Services Bill, 2020, which were passed by the Lok Sabha on Thursday would now go to the president Ram Nath Kovind for his assent to be declared as law.

Soon after the passage of the bills, Modi tweeted to send his good wishes to the farmers for the “watershed moment in the history of Indian agriculture” and said the bills would ensure a complete transformation of the agriculture sector as well as empower crores of farmers.

In a series of tweets, Modi said, “A watershed moment in the history of Indian agriculture! Congratulations to our hardworking farmers on the passage of key bills in Parliament, For decades, the Indian farmer was bound by various constraints and bullied by middlemen. The bills passed by Parliament liberate the farmers from such adversities. These bills will add impetus to the efforts to double income of farmers and ensure greater prosperity for them.

“Our agriculture sector is in desperate need of latest technology that assists the industrious farmers. Now, with the passage of the bills, our farmers will have easier access to futuristic technology that will boost production and yield better results. This is a welcome step.”

The prime minister also sought to allay the apprehensions expressed by many farmers’ organisations, agricultural scientists and some of the opposition parties that the passage of the bills would “corporatize” the Indian farm sector and the small and marginal farmers, who constitute about 86 per cent of the farming community in the country, would actually be sufferer as the government would use the back-door to discontinue the practice of Minimum Support Price (MSP) and leave the farmers at the mercy of the rich private players. Modi maintained that despite the farmers had been given the freedom through the two bills to sell their produces to any buyer anywhere in the country removing the restrictions of their being forced to sale only in the nearest Agricultural Produces Markets Committees (APMC), the government would not dismantle the existing infrastructure of MSP and the farmers would be given both the options.

“I said it earlier and I say it once again. System of MSP will remain. Government procurement will continue. We are here to serve our farmers. We will do everything possible to support them and ensure a better life for their coming generations,” Modi maintained.

As was expected in the Upper House where the ruling BJP did not enjoy majority on its own, the House witnessed tumultuous scenes during the passage of the contentious farm bills as members from Opposition parties snatched and threw papers from the table and even broke the chairman’s mike.

While the opposition has been protesting and demanding that the Bills be sent to a Select Committee, the ruckus erupted after Deputy Chairman Harivansh sought the members’ nod to extend the time of sitting of the House beyond 1 pm till the passage of the Bills. The opposition members demanded that the House be adjourned as per the scheduled time.

However, the Deputy Chairman continued with the proceedings of the House and asked Agriculture Minister Narendra Singh Tomar to continue his response to the debate on the Bills.

At this point of time, Opposition members started protesting against the Deputy Chairman’s decision to extend the timing without a “consensus” of the House.

When the Deputy chairman did not accept the demand to adjourn the House, some of the opposition members arrived at the well and began snatching and throwing away papers from the table. Some of the members even broke the mike that was fixed on the table of the chair. Due to this, the House could not function properly and was adjourned for 15 minutes.

After the House resumed at 1:40 pm again, the Deputy Speaker took up statutory resolutions moved by the opposition members, seeking the reference of the Bills to a Select Committee. However, these resolutions were negated by the House.

In the midst of the uproar, the Rajya Sabha took up the Farmers Produce Trade and Commerce (Promotion and Facilitation) Bill, 2020, clause by clause, into consideration and passed by a voice vote.

Soon after this, the second farm bill– The Farmers (Empowerment and Protection) Agreement on Price Assurance and Farm Services Bill, 2020—was passed, also by voice vote.

The opposition parties as well as many farmers’ organisations including the Bharatiya Kisan Sangh, the farmers’ wing of the Sangh Parivar, had been targeting the government on MSP and wanted the bills to be referred to a select committee of the House for in-depth discussions on the issue and consulting various stake-holders. The food processing minister Harsimrat Kaur Badal, the only Akali Dal representative, had resigned from the Modi cabinet earlier this week on the same issue. MPs from several opposition parties feared that these bills would benefit private players and give rise to contract farming.

Besides the Congress, Trinamool Congress, Aam Aadmi Party, Shiv Sena, CPM, DMK and Rashtriya Janata Dal, which were against the NDA, the bills were also opposed by some of the NDA allies including the Shiromani Akali Dal, AIADMK, and the Telangana Rashtra Samiti (TRS). The only parties other than the BJP sticking to the NDA on the issue were the JD(U) and the YSR Congress.