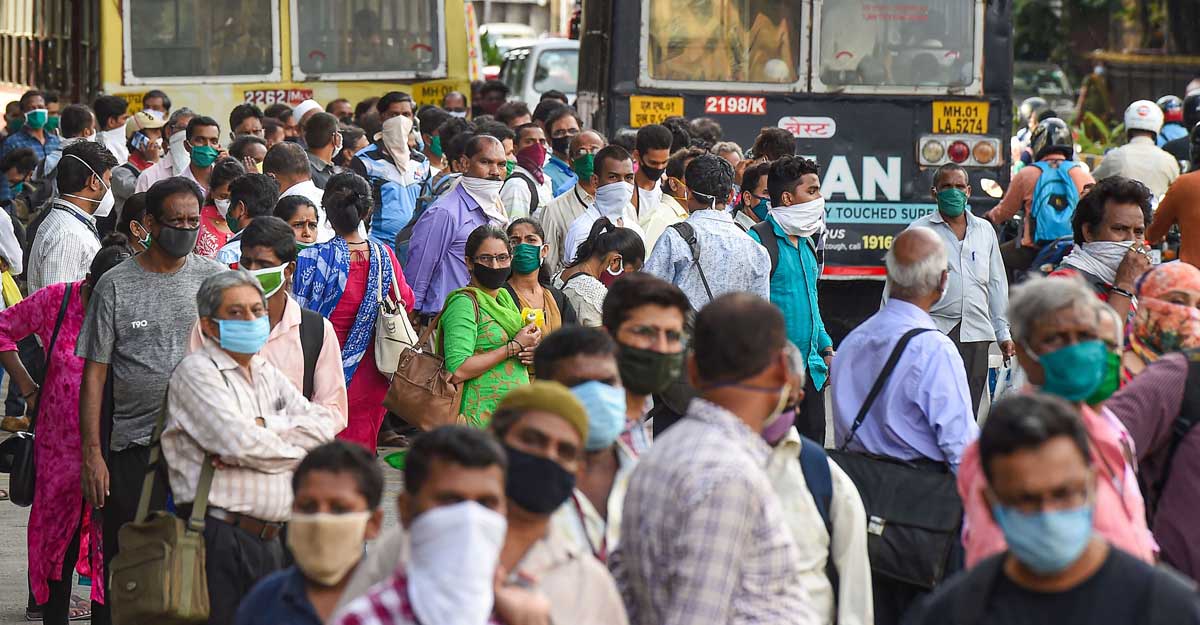 NEW DELHI, Oct 18: It is almost like pick and choose to one’s liking. There are both good omens and bad omens about the spread of Coronavirus in India and most of the scientists and doctors do not seem to know which one will prove correct in the coming days.

Amidst the union health minister Harsh Vardhan for the first time admitting on Sunday that India is currently going through the undesirable community transmission stage al beit in limited areas, a government-appointed scientific committee in its report said the Covid-19 epidemic seems to have peaked and is now on the decline while another committee of experts warned of possible exponential rise in the number of positive cases with the onset of winter as being experienced in parts of Europe.

The government-appointed committee headed by Prof M Vidyasagar of IIT Hyderabad, using the computer models to map the trajectory of the epidemic in the country, has concluded that the pandemic may have peaked in the middle of September and is now on the decline but will run its course till February, next year. According to it, the total number of infections in India is unlikely to exceed 106 lakh (10.6 million). So far, 75 lakh people in India have been infected, of which nearly 66 lakh have recovered.

Expectedly the committee also indulged in back-slapping of the government for the “timely” imposition of lockdown. The committee claimed that the lockdown imposed in March has had a powerful impact on slowing down the spread of the disease in the country. In the absence of the lockdown, the death count would have gone up to 25 lakh, it said. As of now, 1.14 lakh people have died in India because of the disease. However, it disfavoured any further lockdowns in future. Any more lockdowns are “undesirable,” the committee said since that was unlikely to have any significant impact.

The committee expressed the apprehension that the upcoming festival season, and the approaching winters, might “increase the susceptibility” of the people to this infection, and therefore, has recommended that current protective measures must be continued.

India reported a daily jump of 61,871 coronavirus infections in 24 hours, taking its tally near the 75-lakh mark. The number of cases in the country now stands at 74,94,551. The total number of recoveries have surged to 65,97,209. While the number of active cases remained below eight lakh for the second consecutive day, India continues to be the second-worst hit nation. The COVID-19 recovery rate in the country has improved to 88.03 per cent, the Health Ministry said. The Covid-19 case fatality rate stands at 1.52 per cent.

In contrast, some groups of experts fear that India too might follow the European and American course of major second wave as the mercury dips in the coming months. They have pointed out that Russia and the United Kingdom are experiencing a second wave of Covid-19 aggravated by winter. The union health minister and the Corona experts’ panel headed by Dr V K Paul have also earlier predicted such an eventuality. “There is no reason to dismiss the possibility of a second wave in winter and India must be ready to face such a situation,” Harsh Vardhan had stated earlier.

The panel pointed out that in the UK, Covid-19 cases registered a 40 per cent spike with the onset of winter and prediction was that the UK might see 120,000 deaths in this winter.

Though there has been no confirmation, Covid-19 is likely to function like other flu viruses which thrive in winter conditions. The panel also pointed out the previous studies which suggest that all respiratory pandemics including Spanish Flu, Asian Flu, Hong Kong Flu did encounter a second wave after six months of the breakout. But for Covid-19, it would coincide with winter.

People with respiratory problems suffer during winter. In India, pollution was likely to add to this as major cities were highly polluted, the panel said and added that Covid-19 had so far showed no behavioural change because of season change. But as the number of cases were increasing in countries where the temperature has started dipping, it is expected that Covid-19 will become more active during winter in India as well.

It felt that the possibility of more unlocking in the coming months could further aggravate the situation. “In November-December, there is likely to be more unlocking in India. The spillover of festive unlocking will continue in November and December with more trains, flights, inter-state travel, which might push Covid-19 cases higher. Many European countries are going under second lockdown now to check the number of cases,” the panel said.

After remaining in the denial mode all these months, Harsh Vardhan while answering questions at his weekly webinar “Sunday Samvaad” for the first time talked about the community transmission stage but was quick to add that it was “limited only to certain districts and states” at present.

“In different pockets across various states, including West Bengal, community transmission is expected to occur, especially in dense areas. However, this is not happening across the country. It is limited to certain districts,” he said.

Of late, West Bengal Chief Minister Mamata Banerjee has confirmed this transmission in the state. Ahead of Durga Puja, the CM cautioned people and said there were instances of community transmission of Covid-19.

According to media reports, the government had begun identifying about 300 million people who would be given the vaccine first when it is ready. It said that frontline health and sanitation workers, police officials and elderly people with co-morbidities would get the vaccine on priority.

The plan, which is still in the draft stage, aims to cover 23% of the population in the first phase. The final plan is likely to be ready by end October-November, the reports said. The selected individuals would be given an estimated 600 million doses.

Earlier this month, Harsh Vardhan had said India hoped to receive up to 500 million doses of coronavirus vaccines by July next year to inoculate about 250 million people. Officials have said giving the vaccine to India’s 1.3 billion people would be a mammoth exercise, likely to stretch well into 2022.