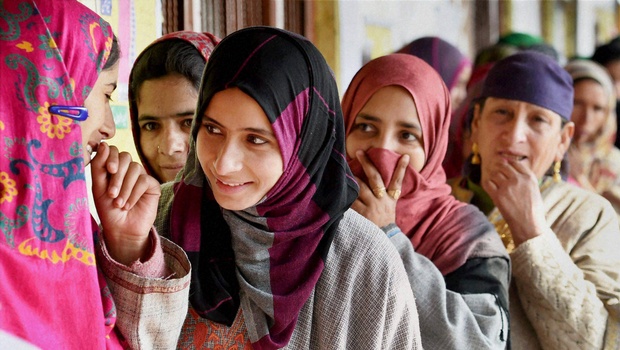 NEW DELHI, Nov 17: With only about 10 days to go for the first phase of the eight-phase elections to the District Development Councils (DDC) in Jammu and Kashmir, the first democratic exercise since article 370 was scrapped in August, last year, politics has heated up in the union territory with brickbats flying across between the BJP and the opposition alliance termed by it as “Gupkar gang.”

While the union home minister Amit Shah called the opposition alliance “anti-national and unholy who are ready to seek China’s help” and asked the Congress to clarify its stand on the restoration of article 370 that “denied equal rights to women, dalits and tribals,” the alliance leaders including two former chief ministers hit back saying it was the BJP’s archaic style of projecting anyone opposed to its ideologies as “anti-national.”

“How can forming an alliance to participate in the democratic process of elections be termed anti-national?” the former chief minister Omar Abdullah asked. His successor Mehbooba Mufti, the one-time leader of the alliance partnering BJP, pointed out that the BJP always projected itself as “saviour” and its political opponents “internal and imagined enemies” of the nation. “Love jihad, tukde tukde and now Gupkar Gang dominates the political discourse instead of rising unemployment and inflation,” she said terming it as a “stale and predictable tactic” of the BJP.

Shah lashed out at political parties in Kashmir that have come together under the umbrella of the People’s Alliance for Gupkar Declaration (PAGD) and said by supporting the restoration of Article 370 in the Union Territory, they want to take away the rights of Dalits, women and tribals.

In a series of tweets, Shah said the Gupkar alliance, a coalition of political parties in Jammu and Kashmir, is a “global gathbandhan against national interest.” He claimed the Congress and the “Gupkar Gang” want to take J&K back to the era of terror and turmoil. “The Gupkar gang is going global! They want foreign forces to intervene in Jammu and Kashmir. The Gupkar gang also insults India’s tricolour. Do Sonia ji and Rahul ji support such moves of the Gupkar gang? They should make their stand crystal clear to the people of India,” Shah tweeted.

The DDC elections in Jammu and Kashmir, now a Union Territory, are to be conducted in eight phases between November 28 and December 19, and the counting will take place on December 22.

The PAGD, an alliance of seven parties, will jointly contest against the BJP in the upcoming district development council elections in the UT. The mainstream parties, including the National Conference, PDP, Peoples Conference and CPM, formed the Gupkar alliance last month and are fighting the maiden DDC elections together. Last week, the Congress formally joined the deliberations on seat-sharing within the alliance.

Pointing out that the PAGD was not a “gang” but a “legitimate political alliance,” Omar Abdullah said, “I can understand the frustration behind this attack by the Hon’ble Home Minister. He had been briefed that the People’s Alliance was preparing to boycott elections. This would have allowed the BJP & newly formed King’s party a free run in J&K. We didn’t oblige them,” Abdullah tweeted.

Mehbooba Mufti wondered, “Fighting elections in an alliance is also anti-national now. BJP can stitch as many alliances in its hunger for power but somehow we are undermining national interest by putting up a united front.”

Targeting the BJP, Abdullah said only in J&K can leaders be detained and called anti-national for participating in elections supporting the democratic process.  “We are not a “gang” Amit Shah ji, we are a legitimate political alliance having fought and continuing to fight elections, much to your disappointment,” Abdullah said in a tweet.

“The truth is all those who oppose the ideology of the BJP are labelled corrupt & anti-national,” he added.

The union law minister Ravi Shankar Prasad had attacked the Congress on Monday for partnering with the PAGD in the DDC elections. Pointing out that the former chief minister Farooq Abdullah was open to taking China’s help to restore Article 370 and Mehbooba Mufti having said she would not hoist the tricolour till the flag of Jammu and Kashmir is restored, Prasad asked the Congress to clarify if the party would support such anti-national activities of the PAGD partners.

Prasad said various laws for the poor and the weaker sections were now applicable in Jammu and Kashmir after its special status was revoked. “Would the Congress want to deny the privileges to the weaker sections in J&K by supporting restoration of article 370?” he asked.

“Farooq Abdullah has no compunction in seeking the support of China for the restoration of Article 370… Mehbooba Mufti said she won’t hoist the tricolour unless the J&K flag is restored,” Prasad said.

“We applied Central laws to Union Territories of Jammu and Kashmir and Ladakh… They do not want certain laws, including the Prevention of Corruption Act, in Jammu and Kashmir so that they can continue with corruption. People who have been Chief Ministers are saying that they will take the help of China for the restoration of Article 370. It is an anti-national activity,” he said.

Prasad demanded that the Gandhis clarify if they backed the statements of Abdullah and Mufti. “Sonia Gandhi ji and Rahul Gandhi ji, tell the nation clearly and categorically, does the Congress party want the restoration of Article 370 in the original form?… Does Congress support the statements of Farooq Abdullah and Mehbooba Mufti? Congress should tell if they are with the stated objective of the Gupkar declaration,” Prasad had said.

previous Corona: Delhi May be Heading for Another Round of Area-Specific Lockdown
next BRICS Summit: Modi Lambast Pakistan, Veiled Attack on China
Related Posts