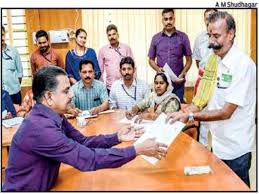 Everyone in Salem knows ‘Election King’ K Padmarajan. Not because he has won a single election but because he has lost every one of them. He has been recognized for his achievement by the Limca Book of World Records as the “most unsuccessful candidate in elections”.
On Monday, the Salem-based tyre retreader renewed his efforts to “prove that a common man can stand for elections” by filing his nomination for the 201st time in Wayanad, Kerala. As to who he will contest against for the seat, it’s Congress president Rahul Gandhi.

Earlier this week, he had filed his nomination – number 200 – in the Dharmapuri constituency in Tamil Nadu, where he will be facing Pattali Makkal Katchi’s Dr Anbumani Ramadoss.

Padmarajan is unfazed. He is in fact, raring to go because in the race he is in — to create a new Guinness Record under ‘most unsuccessful candidate and most election contested’ categories — he is on a winning streak.

“My name had been registered with the Guinness Book in 2004 and they also had entered my name on the website in 2015. But I still haven’t created the record,” says 60-year-old Padmarajan, who first filed his nomination in Mettur Assembly constituency in 1988.

Padmarajan says he sometimes gets threatening calls when he files nominations against ‘star’ candidates. “I was kidnapped in 1991 after I filed my nomination against then Prime Minister P V Narasimha Rao in Nandhyal constituency in Andhra Pradesh,” he says. “I don’t know who the kidnappers were but they let me go.”

Though Padmarajan files his nominations in constituencies across the nation, he does not campaign. The highest number of votes he polled was 6,273 when he contested from Mettur Assembly segment in Salem district in 2011. “I have spent nearly ₹30 lakh in 30 years on elections,” he says.

So, why does he do it? To create awareness that anyone can contest, says Padmarajan. “It is the right of every citizen of India,” he says.