Environment: 4.6 mn acres gutted in 87 major forest fires in US

Chicago: In a potential environmental disaster, at least 24 people lost life and nearly 4.6 million acres of forests were gutted in a series of 87 large forest fires recently in the western states of the USA, prompting President Donald Trump to pay a visit to California on Monday.

Fire-fighters and support personnel continue to work toward containment goals in California, Oregon, Washington, and Colorado states, which remain under evacuation orders as per the directives of the National Inter-Agency Fire Center.

President Trump visited California for a briefing on the west coast fires. Discounting these wildfires due to climate change, he blamed the western states for their failure to properly manage their forests.

More than 28,000 fire-fighters and first responders are combating the fires in the affected states. Over 230 soldiers also joined the efforts.

California Governor Gavin Newsom observed that the state’s buildings had turned into heat domes, the likes of which it had never seen in history, the hottest August-ever.

“The ferocity of these fires, the drought, five-plus years, losing 163 million trees to that drought-something has happened to the plumbing of the world.”

“Over 16,500 fire-fighters are currently out on the lines. And I am very pleased and I am very grateful, Mr. President, that you are recognizing some of our heroes, those National Guardsmen and women that did an extraordinary job saving the lives of hundreds and hundreds of people stranded in some of the most intense fires.” 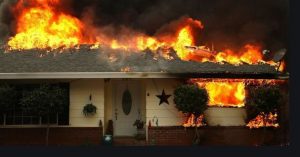 Oregon Office of Emergency Management, the state’s death toll was 10, while 22 people were missing. As many as 4,569 persons have been sheltered, 1,145 residences destroyed, and 512 other structures gutted, State of Oregon Newsroom informed.