New Delhi: By pushing through three farm bills in Parliament, the Bharatiya Janata Party (BJP) has killed several birds with one stone: it has got rid of its oldest ally, Akali Dal; it has put the TMC-led Mamata Banerji government on notice; and it has pushed the NCP, led by Sharad Pawar, to the wall.

And we are not talking about sundry other parties, including the Congress, which regularly shed copious crocodile tears on the farmers’ plight. They all claimed to represent farmers’ interests.

All these three non-BJP parties have long been the real beneficiaries of the APMC system as a vast network of their leaders and middlemen controlled the mandis. Vested interests in the prevailing APMCs are set to lose hugely what with the BJP fulfilling its promise of doubling the income of the farmers!

At present, many farmers—mostly outside Punjab and Haryana—are unaware of the fine print of the three farm bills. That is why big farmers, traders, middlemen, and other vested interests including politicians, have been able to push them onto the roads.

The Shiromani Akali Dal (SAD) tried to corner the Narendra Modi government on the issue but the resignation of its sole minister, Harsimrat Kaur Badal, was immediately accepted, leaving the Badal family flummoxed. With its bluff thus called, now the SAD is really sad!

For the BJP, though, it was good riddance, after its acrimonious divorce from the Shiv Sena, which is still playing out even after a year. Both these parties had forced a far bigger BJP to play a junior role in Punjab and Maharashtra, respectively. In fact, Uddhav Thackeray had made the Modi 1.0 regime’s life hell between 2014 and 2019. Now the Shiv Sena chief-cum-Chief Minister is stewing in his own juice. The same holds true for the Badals. Both these parties were gaining weight due mainly to the Modi charisma, which the BJP has denied them now.

So what has the BJP done through the farm bills?

In 2019, the Congress had, in its election manifesto, promised to repeal the APMC Act. The Nitish Kumar government had, in 2006, already done so in Bihar.  Now the NDA government has merely curtailed the APMC’s powers and given farmers the freedom to decide whom they would sell their products and at what price. They would no longer be compelled to sell it to the licensed agents of APMCs, who are actually middlemen between politicians and deep pockets.

The Centre, particularly Prime Minister Narendra Modi, has clarified that the APMC system will stay and so would the MSP procurement.

In its 2012-13 report, the National Sample Survey Office (NSSO) had revealed that not more than 10 percent of farmers actually sell their produce at the minimum support price (MSP). In 2019-20, only 6% did so. Every farmer wants to get the best price and sells at the MSP only when required.

The remaining 94 percent of farmers sell their produce to the open market against a better price. Of course, the six percent of farmers have an assured income and the majority of them are from Punjab and Haryana. Even now, there are a large number of procurement centers outside the APMC system and they also engage in MSP operations.

The new law will restrict the powers of APMCs to their physical boundaries and open up space to private players.

In other words, it will jeopardize the earnings of licensed APMC agents, traders, and the middlemen, who have so far been the real beneficiaries of the prevailing system. Each year, they earn thousands of crores of rupees across India by arm-twisting the poor farmers to sell their produce at the lowest possible prices and make big players market it at the highest possible prices.

Many of these silent operators work through different cooperatives, panchayats, and other rural bodies. There has been a well-entrenched exploitative system, crafted by the Congress and other regional parties, which has run the show so far. Irrespective of the coming and going of governments at the Centre and in the states, this system has worked smoothly for the repeated revival of these non-BJP parties across the political spectrum.

That is why non-BJP parties now fear the new law as their death-knell. It will check money flow in the APMCs which they control. The new law envisages that APMCs cannot charge a cess on the trade that takes place outside their premises. Clearly, more products will now be sold outside the APMCs than inside!

The MSP system will continue through government procurement centers, which has further rattled the middlemen. It is only a matter of time when the farmers realize the benefits of the new bills. There will now be more buyers outside the mandis, and help in an effective price discovery through bargains.

With the proliferation of the Internet, mobile telephony and Digital India drives, a national network is already emerging in this regard. The National Agricultural Market (e-NAM), India’s official online trading platform for agricultural produces, will further smoothen the emerging system and eliminate the fossils.

Many middlemen are set to go out of the system. In any case, their role in the agricultural marketing ecosystem was getting minimal as more and more farmers were turning against their exploitative tactics. In particular, middlemen in the Punjab and Haryana are going to suffer most grievously. These adhatiyas at the APMCs were charging at least 2.5% agent commission, now a thing of the past. The state governments are also concerned as they are set to lose the mandi fees.

Of course, the Centre will soon have to look into some of the gaps in the new system. It will have to register even private players allowed free trade, keep a check on their practices, payment mechanism, and infrastructure to minimize 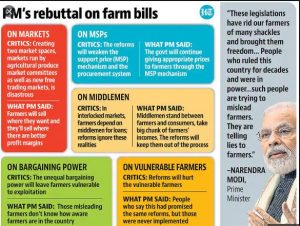