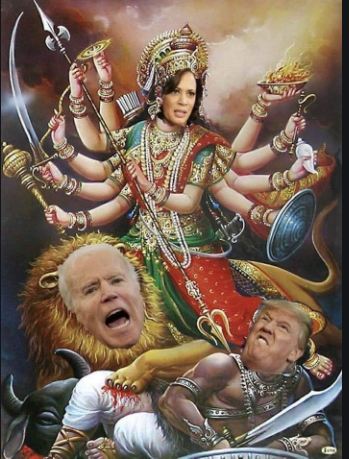 New Delhi: Former Congress President Rahul Gandhi—and he is likely to return as the next one as well!—has serious competition in Kamala Harris, the Vice Presidential running mate of Democratic Presidential hopeful Joe Biden.

With less than two weeks to go for the November 3 vote, and incumbent Donald Trump closing the gap substantially, each day, the panicked Democrats have stooped to unprecedented low levels to woo the Hindu and other electors.

Since Kamala’s mother, Shyamla Gopalan had Tamil roots, the Democrats are trying to take advantage of the ongoing Navratri Festival by portraying her as a Hindu goddess slaying Trump, shown as a “demon”.

In their latest antic to woo the Indian-American community voters, the Kamala supporters made viral a morphed photograph depicting Harris, a Christian, as the Goddess Durga slaying Trump with a trident. Biden himself has been shown as the lion the goddess is riding on!

But the Hindus have not been amused with Kamala aping Rahul Gandhi who had, similarly, hopped dozens of Hindu temples and claimed to be a ” janeudhari” Brahmin so as to woo the majority community just ahead of the 2019 Lok Sabha elections.

The result? His party ended up with just 51 seats in a House of 543 MPs. Rahul himself lost his dynasty’s pocket borough, the Amethi seat, by a ‘respectable’ margin of 55,000 votes but saved his face from further humiliation as he won in Wayanad, Kerala.

In the US,  the Democrats seemed to be too clever by half. Their antics were roundly denounced by various Hindu groups across the US and other countries. The Hindus were outraged at this morphed photo of the Goddess Durga with Kamala Harris’s face after it was shared online by none other than the woman candidate’s own niece Meena Harris, 36, a lawyer.

The image shared by Meena Harris, a 36-year-old lawyer, was based on one of the most famous representations of the goddess, where she is seen riding a lion and killing a demon with a trident.

The image was strongly denounced by many American Hindu groups, who called it offensive to their religious beliefs.

“Your tweeting a caricature of the feminine divine, Maa Durga, with faces superimposed, deeply aggrieved many Hindus globally,” Suhag A Shukla of the Hindu American Foundation (HAF) tweeted on Monday.

Another prominent Indian-American, Rishi Bhutada of the Hindu American Political Action Committee (HAPAC), said the “offensive” picture was already circulating on WhatsApp before Meena’s tweet. He also sought an apology from Meena.

On October 17, the first day of the Navratri festival, Joe Biden and Kamala Harris had greeted the US-based Hindu community numbering about four million.

previous Venezuela plans to use Russian and Chinese coronavirus vaccines for its citizens
next Bonus Announced for Central Government Employees, to get Rs 3,737 Crores