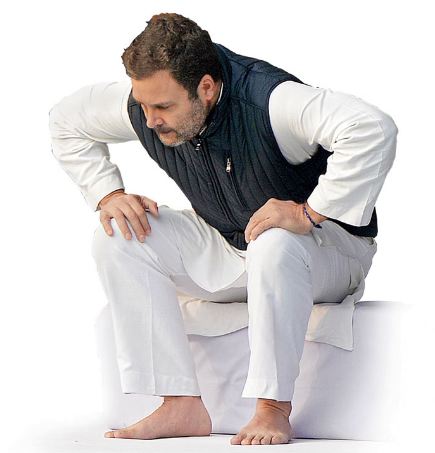 Global Indians: Why is Rahul Gandhi a comic relief in Indian politics?

Global Indians: Why is Rahul Gandhi a comic relief in Indian politics?

New Delhi: One consistency that distinguishes Rahul Gandhi among all other Indian politicians is that he does not care about what others think of him or his statements. He just blurts out, come what may, without ever thinking of the consequences.

He never refuses; he always amuses. And he does not remember!

Why would one, otherwise, write about a ‘celebrated’ Indian Member of Parliament in a column dedicated to Global Indians?

Indians settled abroad should know: India continues to elect an ‘alien’ to its Parliament. In 2019, however, his angry voters in Amethi forced the Last Nehru-Gandhi to find refuge Down South at Wayanad in Kerala.

For a long time, the irrepressible Dr. Subramanian Swamy has demanded the annulment of his Indian citizenship, claiming that Rahul is, in fact, a British citizen with business interests there.

But Rahul is as irrepressible. He will do nothing to save his own party from extinction. Raised as a friendless prince, he does not even realize that his words are irrational and completely off-the-mark.

He has the dubious distinction of having retained the world’s longest apprenticeship. For 10 long years (2004-14), he remained a Prime Minister-in-Grooming, was the power behind Prime Minister Dr. Manmohan Singh’s ‘throne’, had zero experience in running even a village panchayat but had the audacity to tear in public his own party-run government’s Cabinet-level decisions.

At a time when his party veterans are concerned about the Grand Old Party’s plummeting fortunes and crying for its revamp, Rahul continues to tweet out his ‘pearls of wisdom’ left, right, and center on issues that are beyond his comprehension or which may put himself and his party in the dock. A tweet-a-day keeps Rahul in the news! Like his own health bulletin!!

On November 23, for example, he tweeted that “China’s geopolitical strategy cannot be countered by a PR-driven media strategy. The simple fact seems to elude those running the GoI.”

But he, and his political outfit, conveniently forgot that a certain Rahul Gandhi, the Congress Vice President in 2017, had secretly ‘confabulated’ with Chinese Ambassador to India Luo Zhaohui in New Delhi at a time when the country was facing a 73-day-long standoff against China in Doklam. He and his party tried to wriggle out of this acutely embarrassing meeting but it stuck as a dark spot on Rahul forever. But he continues to repeat himself.

Even senior Congress leaders are worried about being shepherded by such a “leader” who is completely cut off from reality and depends on a hand-picked coterie for their ‘advice’.

No wonder, the “G-23” group of dissenters, who wanted leadership issues sorted out in August, has become active again.

Two of its vocal members have spoken up over the last weekend.

Kapil Sibal regretted that the Congress is no longer an effective opposition anywhere, with no efforts being made to strengthen the organization. “How can a party function without a leader for one-and-a-half years…Congress workers do not know where to go.”

Ghulam Nabi Azad also lamented that the party structure has collapsed and that “anyone can get any post” in the party—hinting at the Rahul coterie running the show.

After the debacle in the Bihar Assembly elections, several state Congress leaders had condemned Rahul and his sister Priyanka Vadra for holidaying in Shimla while Congress workers slugged it out.

For all their earlier successes and later failures, however, the Nehru-Gandhis are comic relief in an otherwise grim Indian politics.

They do entertain the country.

Even as their comatose party dies.

No wonder, Former US President Barack Obama, who had apparently diagnosed Rahul’s problems years ago, said in his recent book: that Rahul has a “nervous, unformed quality about him as if he were a student who’d done the course work and was eager to impress the teacher but deep down lacked either the aptitude or the passion to master the subject”.

A Gold Medal for Rahul Gandhi!