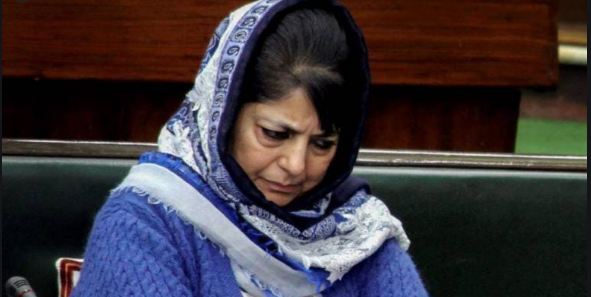 New Delhi: As expected, the meltdown of the People’s Democratic Party (PDP) in Jammu and Kashmir began within two weeks of its president Mehooba Mufti’s release from 14-month-long detention when three senior leaders quit the party on Monday, stating that her utterances hurt their ‘patriotism’.

In a communication to her, they said that they are “feeling quite uncomfortable” over some of her actions and “undesirable utterances”, especially which hurt patriotic sentiments”.

Mufti had said last week that her party would not unfurl the Tricolour less they are allowed to raise the flag of J&K as well, the right to which had been conferred on the erstwhile state by the now-abolished Article 370 of the Constitution.

The PDP chief had claimed that the relationship of J&K with the national tricolor was not independent of the erstwhile state flag. “When this flag comes in our hand, we will also raise that (Indian) flag as well”, she had said, adding the J&K flag had been taken away by “dacoits.”

She was referring to the BJP with which her party had run a government after Narendra Modi became the Prime Minister in 2014.

After her release, Mehbooba had also joined the People’s Alliance for the Gupkar Declaration, a grouping of six desperate political parties trying to survive in the border state. National Conference (NC) president Farooq Abdullah has been as its chairperson and Mufti his deputy, giving shape to an alliance that they have formed to demand the restoration of the erstwhile state’s “special status”.

Both Mufti and the Abdullahs have been issuing controversial statements in an attempt to revive their dead parties and politics.

In such a statement, Dr. Abdullah had said recently that China’s help could be sought for the restoration of Article 370, a stand condemned by many. Last week, he also appeared before the Enforcement Directorate in a major fund embezzlement case filed by the Board of Control for Cricket in India (BCCI).