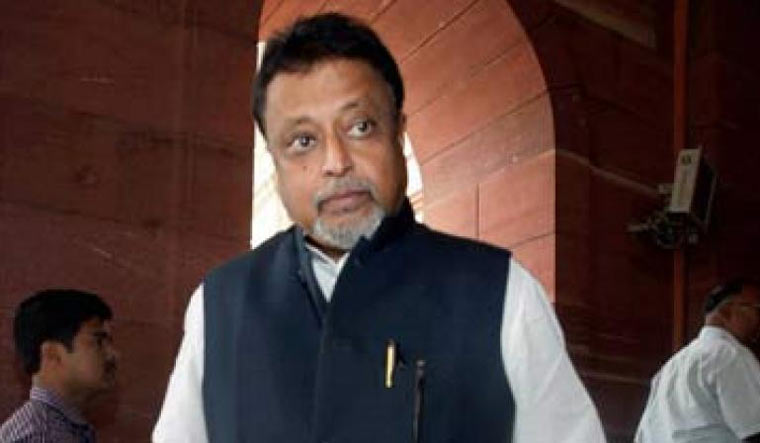 NEW DELHI, June 11: One of the firsts to desert the Trinamool Congress and jump on the BJP bandwagon, has also become one of the firsts to return to the mother organization. Nearly a month after the BJP suffered a big defeat in the West Bengal Assembly polls, its national vice president Mukul Roy on Friday returned to the TMC.

In his very first media conference after re-joining the TMC, Roy launched a scathing attack on the BJP. “In the present circumstances, no one can stay in the BJP in Bengal,” he stated.

One of the founding members of the TMC, the 67-year old Roy had joined the BJP after some rift with the party chief and the West Bengal chief minister Mamata Banerjee, in November, 2017.

Giving due weightage to Roy’s home coming, Mamata Banerjee had arrived at the TMC Bhavan before Roy came to the party office to rejoin the TMC. He was welcomed by the party general secretary and Mamata’s nephew Abhishek Banerjee. Mamata Banerjee and Roy, who was elected to the state Assembly on the BJP ticket in the just-concluded Assembly elections from Krishnanagar Uttar, later held a joint press conference after a two-hour meeting.

Roy described Ms. Banerjee “as a leader of the entire country”. He said he was feeling relieved after quitting the BJP. Banerjee in turn described Roy as an “old family member” and added that “old is always gold”. “Our party is already a strong party. Mukul is an old family member. He was pressured by agencies. I think this decision will provide him mental relief. His health was deteriorating also.”

“Mukul Roy has returned to his roots today. He could not work in the BJP. During election, he did not make any anti-TMC statements. He has found peace by returning to his former party. He was made the national vice-president of the BJP, but he was not satisfied with the work. Mukul will continue to play the same role in our party which he used to play earlier,” said Banerjee after inducting Roy into the party.

After rejoining the TMC, Mukul Roy said, “It feels good to see my former colleagues here. Bengal will restore its glory under the leadership of Mamata Banerjee. I will issue a written statement on why I left the BJP. Under the present condition, no one can remain in the BJP.”

Roy’s return to the TMC indicated the possibility of more desertions from the BJP ranks in West Bengal but Banerjee indicated that those who had launched filthy attacks on the TMC after joining the BJP would not be welcomed back in the party even they wanted to. Her indication apparently was towards people like her one-time friend-turned foe Suvendu Adhikari, who used foul language to attack Banerjee and the TMC after joining the BJP just before the Assembly elections.

“Those who defected from the party just before the elections and attacked it in sharp language would not be allowed to join it again. Only those who are gentle, we will consider them,” Banerjee observed.

The speculation of Mukul Roy’s return to the TMC gained momentum after Abhishek Banerjee visited a city hospital to inquire about the health of his wife last week. That was followed by the Prime Minister Narendra Modi calling up Roy to inquire about his wife’s health but the apparent intention was to stop Roy from deserting the party.

The veteran politician was reportedly upset for not being given much importance during the 2021 Assembly polls, where Suvendu Adhikari emerged as the important face of the BJP. Roy had played a crucial role in the 2019 Lok Sabha polls when the BJP won 18 out of the 42 seats.

Once a close aide of Mamata Banerjee, Roy resigned from the TMC in September 2017 and was suspended by the party for six years for anti-party activities. He joined the BJP in November that year. In September 2020, Roy was made national vice-president of the BJP. Roy’s son Subhrangshu too joined the BJP in May 2019.

Roy is arguably one of the most important political figures in West Bengal after Banerjee at least for the past decade and a half. Beginning his political career from the Youth Congress, Roy co-founded the Trinamool Congress with Mamata Banerjee in 1998, became her lieutenant, worked towards a stunning TMC win in 2011 against the Left, and retained power in the next term as well.

Such was his influence that after Mamata Banerjee, the Trinamool Congress pressured the Congress-led UPA government to drop Dinesh Trivedi and appoint Mukul Roy as Union Railways Minister in 2012.

When he joined the BJP in 2017, Roy had brought with him all his administrative and political nous of Bengal. It was around that time that the party began looking seriously at building its base and expanding in West Bengal. BJP general secretary Kailash Vijayvargiya used Roy’s organisational skills as well as a widespread and deep-rooted network in the state to raise the BJP as a force. “Roy’s contribution since the early days cannot be ignored in BJP as it emerged as the main opposition party in a state like West Bengal where Left politics had its deep roots,” said a BJP leader who was involved with the party function in Kolkata. Under his leadership, the BJP had won 18 of the 40 seats it contested in the 2019 Lok Sabha elections in West Bengal.

Vijayvargiya, according to party sources, had tried to persuade the BJP top leadership to reward him with positions. While Roy had expressed his desire to be part of the Union Government, Prime Minister Narendra Modi did not entertain the idea, mainly due to the charges of corruption against him.

Finally, the BJP leadership gave him a position in the organisation. When J P Nadda constituted his team in September 2020, Roy was elevated as the national vice-president of the BJP. Roy’s elevation had triggered public outburst from Rahul Sinha, who had then been dropped as a secretary in the organisation. “I have given so many years to the BJP. I have given my 40 years to the party. The award I received is that a TMC leader is coming, so I have to leave. My party has rewarded me, and I have nothing to say,” he was quoted as saying then.

Mukul Roy has been disillusioned with the BJP leadership for a while – it began even before the assembly election. During the heated campaign, Roy seemed to take a backseat, with BJP state president Dilip Ghosh and newly inducted Suvendu Adhikari taking all the political space, the latter fighting a pitched battle with Chief Minister Mamata Banerjee in Nandigram. Immediately after the elections, Banerjee also showed signs of softening towards Roy, drawing a difference between him and Adhikari. A senior TMC leader said, “It is not that Roy leaving did not hurt Mamata di. But he was never vicious against her like Suvendu was. There was always scope for a realignment.”

The final nail in the coffin for an already disillusioned Roy was the appointment of Adhikari as the leader of opposition, despite Roy’s crucial role in bringing the BJP up as a force to reckon with. Both Roy and Adhikari had won their assembly seats, but only one was treated with “respect,” TMC leaders said. “In TMC, there may be differences, but we always knew the importance of Mukul Roy. In BJP, it is Suvendu Adhikari who is getting the meetings with Amit Shah and Modi.”