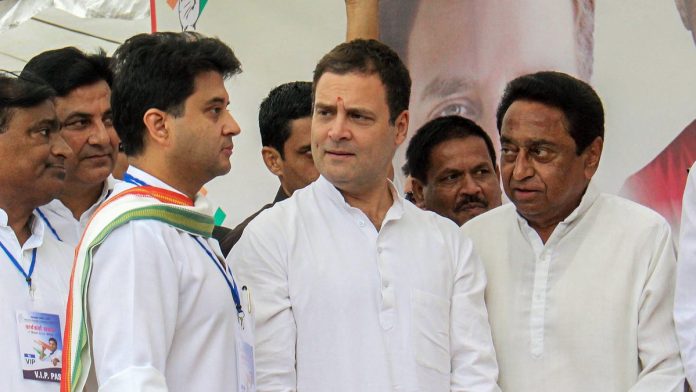 BHOPAL, Oct 20: The campaigning for the by-elections for 28 seats to the Madhya Pradesh Assembly seems to have taken a new low with women being made the object of sexist slur by both the main contestants, the Congress and the BJP.

Even as in a virtual snub of his party’s supreme leader the former Madhya Pradesh chief minister Kamal Nath refused to apologise for terming a dalit woman contestant “an item,” fresh controversy has broken over a BJP minister contesting a by-election in the central Indian state calling the wife of his Congress rival as “mistress.”

Surprisingly Kamal Nath, despite the former Congress president Rahul Gandhi disapproving his “item” comment against the BJP dalit leader Imarti Devi, refused to submit a public apology for his sexist slur claiming that it was taken out of context and that he did not intend to insult anyone. He said he had already clarified the context in which he used the controversial term. “Why should I apologise when I did not intend to insult anyone,” he asked. “If anyone felt insulted, I have already expressed regret.”

Rahul Gandhi had called Kamal Nath’s comments ‘unfortunate’. “Kamal Nath ji is from my party but personally, I do not like the type of language that he used,” Rahul said. “I do not appreciate it, regardless of who he is. It is unfortunate.” Kamal Nath

Nath has also written to his successor, chief minister Shivraj Singh Chouhan, asking him ‘not to play politics’. Earlier, too, Kamal Nath had chosen to justify his misogynist comment and claimed that his remark was distorted to deviate public discourse from ‘main issues’ such as joblessness.

The term, ‘item’, is used in Hindi as a derogatory slang to objectify women as show them as objects of desire or as females with loose morals.

The objectionable remark was made while he was addressing a rally in the run-up to the by-polls scheduled for November 3.

While addressing a political rally on Sunday, Kamal Nath referred to the Dalit politician as an ‘item’. “Suresh Raje ji hamare ummeedvar hai…yeh uske jaise nah hai…kya hai uska naam … main kya uska naam lun? …apko toh mujhe pehle savdhan karna chahiye tha … yeh kya item hai… (Our candidate is not like her… what’s her name? You know her better and should have warned me earlier… What an item!),” Kamal Nath said in Hindi while the crowd called out Imarti Devi’s name and were seen hooting and cheering at his despicable remarks.

The sexist remark came a couple of days after Imarti Devi accused Kamal Nath of bribing the MLAs when he was the chief minister. Imarti Devi, a former state minister, who switched ranks to the BJP after Jyotiraditya Scindia’s rebellion, had told reporters on Thursday that Nath used to pay Rs 5 lakh to Congress MLAs who could not be granted ministerial posts.

A distraught Imarti Devi was reduced to tears because of the objectionable barb by Kamal Nath against her. Hurt by the comment, she responded by stating that Congress leader Sonia Gandhi should dismiss such leaders and the latter should be ‘taught a lesson’.

“Is it my fault that I am poor and born into a poor Scheduled Caste family? I want to request Sonia Gandhi not to keep people like Kamal Nath in Congress. If Kamal Nath uses such a language against me then what will happen to women of SC community. How can any woman move forward?” Imarti Devi asked.

“I want to make a request to BJP that such people should be taught a lesson. Is it my fault that I have a name which is Imarti. I used to consider Kamal Nath as an elder brother but today he has disrespected me. I want to say to him that you are not fit for politics,” she added.

Even as the row over Kamal Nath’s comment is yet to die down, a BJP minister in MP is facing flak for allegedly using a derogatory term for the wife of a Congress candidate.

In a video that went viral on Monday, minister Bisahulal Singh, who is contesting the by-poll from Anuppur, was purportedly heard describing the second wife of Congress candidate Vishwanath Singh Kunjam as “mistress”.

Kunjam termed Bisahulal Singh’s statement as baseless and said he would file a defamation suit against him.

“I got married 15 years back and have a 14-year-old daughter. I will file a defamation suit against him. This exposes the BJP candidate’s character. On one hand they are staging drama of silent fast and on the other hand they disrespect women,” he said.

The state BJP spokesman Rajnish Agrawal said he was unable to contact Singh as he is campaigning in interior areas. The BJP leaders in the state led by the Chief Minister on Monday sat on a two-hour silent fast to protest against Kamal Nath’s remark wherein he referred to state minister Imarti Devi as “item.”