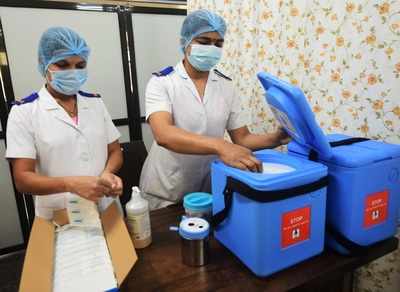 NEW DELHI, Jan 17: The Maharashtra government has refuted reports of adverse reaction to some patients after receiving the Covid vaccination on the first day of the mass immunization drive in the country on Saturday. The Maharashtra health minister Rajesh Tope said on Sunday that there had been no report of adverse reaction or side effects of vaccination in the state so far. “Everything is safe and will be safe,” Tope said.

A section of the press on Saturday had reported adverse reaction to 14 patients after they were administered vaccine though none of the cases were of serious nature or fatal, the reports had claimed.

As many as 18,425 beneficiaries, or 65 percent of the target for the first day, were given vaccine shot across the state on Saturday, a health department official earlier said. The Maharashtra government on Saturday evening announced suspension of the COVID-19 vaccination drive in the state till Monday owing to problems in the Co-WIN app. Tope said it was expected that a “small technical glitch” in the app of the Centre will be addressed by Sunday or Monday and the drive will resume from Tuesday.

However, a nurse in Kolkata fainted after she was administered the Corona vaccine. Her condition was stated to be “stable” and an official spokesman of the health department said on Sunday that a medical board of experts had been formed to study why the 35-year old nurses fainted after receiving the shot.

The health department official, who is also a prominent doctor, said the experts were examining her condition and the analysis might take some time. “She is stable. We have formed a board of experts to take care of the treatment procedure. Let’s see how quickly we can analyse the reason behind her illness and come up with a solution. As of now, she is responding well to the treatment,” the official said. “She was found to be suffering from chronic Asthma and is hypersensitive to a number of drugs.” The official added.

As the Maldives president Ibrahim Mohamed Solih send a congratulatory message to the prime minister Narendra Modi and the Indian government for launching vaccination drive against COVID-19, the Congress raised a pertinent question whether the government would ensure free vaccines to poor and the underprivileged in the country.

The Congress chief spokesman Randeep Surjewala said though the government claimed it would cover three crore people in the first round of the vaccination drive with free vaccine, it was yet to clarify the status of the remaining population.

Meanwhile, India’s Corona caseload climbed to 1,05,57,985 on Sunday with 15,144 fresh infections while recoveries surged to 1,01,96,885, pushing the national recovery rate to 96.58 percent, according to the Union health ministry data.

The death toll increased to 1,52,274 with 181 more fatalities, the data updated at 8 am on Sunday showed. There are 2,08,826 active cases of Corona infection in the country which constitute 1.98 percent of the total caseload and the fatality at 1.44 per cent,  the data showed.