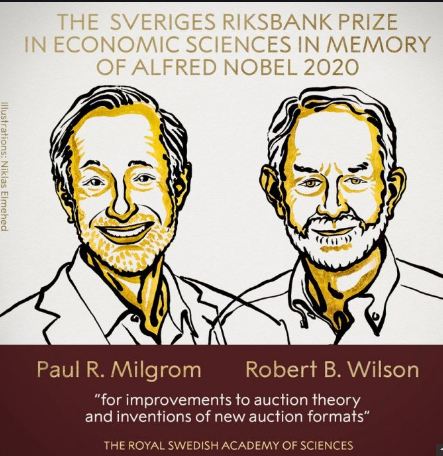 Nobel in Economics: Americans Milgrom, Wilson to get 2020 Prize

Nobel in Economics: Americans Milgrom, Wilson to get 2020 Prize

New Delhi: Two American economists, Paul R Milgrom and Robert B Wilson will be awarded the 2020 Nobel Prize in Economics for their work on “improvement to auction theory and inventions of new auction formats”.

In 1968, Sveriges Riksbank (Sweden’s central bank) had established the Prize in Economic Sciences in the memory of Alfred Nobel, inventor of dynamite and founder of the Nobel Prizes in four disciplines (Chemistry, Physics, Medicine or Physiology, and Peace).

The Prize in Economics is based on a donation received by the Nobel Foundation in 1968 from Sveriges Riksbank on the occasion of the Bank’s 300th anniversary.

The two winners for 2020 were announced in Stockholm by Goran Hansson, Secretary-General of the Royal Swedish Academy of Sciences.

“The new auction formats are a beautiful example of how basic research can subsequently generate inventions that benefit society. The unusual feature of this example is that the same people developed the theory and practical applications. The Laureates’ ground-breaking research about auctions has thus been of great benefit, for buyers, sellers, and society as a whole,” The Royal Swedish Academy of Sciences said in a press release.

The award comes as much of the world experiences the worst recession since World War II because of the impact of the coronavirus pandemic.

The Nobel Prize 2020 in Economics caps a week of the announcement of this year’s Nobel Prizes. Since its establishment in 1969, it has been awarded 51 times.