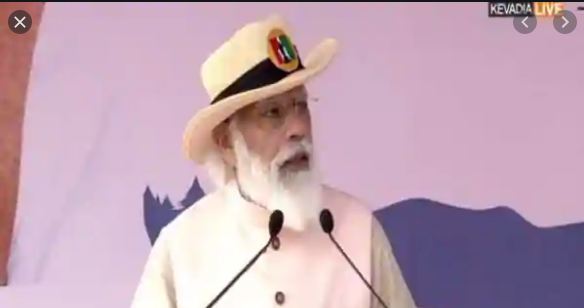 Pulwama: After Pak Min’s confession, Modi gets even with Indian opposition

Pulwama: After Pak Min’s confession, Modi gets even with Indian opposition

Ahmedabad: Armed with fresh evidence, a Pakistani minister’s boast about Islamabad’s clear hand in the February 2019 attack on a security forces’ convoy in Jammu and Kashmir, that killed 40 CRPF jawans, Prime Minister Narendra Modi on Saturday urged the people not to be misled by those who had questioned the terror attack and sacrifice of Indian martyrs.

After paying glowing tributes to Sardar Vallabhbhai Patel at the Statue of Unity in his home state, he urged the masses not to become pawns in the hands of such political parties, as now even a Pakistani minister has officially owned responsibility for the terror attack.

Several opposition parties, including the Congress, had indirectly supported Pakistan’s claims of innocence and questioned the Modi government about the attack, to the extent of accusing it of masterminding the attack to tilt votes in the Lok Sabha elections of May 2019. Pakistan quickly used these anti-BJP parties’ short-sighted claims on international forums against India.

But Pakistan Science and Technology Minister Fawad Chaudhary’s boast in his National Assembly this week that the “Pulwama attack was an achievement of the Imran Khan government” gave a shot in the arm to the BJP, and Defence Minister Rajnath Singh, to question the ulterior motives of the opposition.

Taking this forward while addressing a meeting on Rashtriya Ekta Divas, marking the 145th birth anniversary of the Iron Man of India, Modi said such divisive forces now stand fully exposed in India.

Speaking after the Ekta Parade at the world’s tallest statue (12-meters-high), where paramilitary forces showcased their skills, the PM said, “While I was watching this parade, images of the Pulwama attack crossed my mind. The slain soldiers were also from the paramilitary forces. The entire country had plunged into grief and mourning.

“But there were some who did not share this grief, but questioned the attack and made baseless accusations, looking for own gains and political opportunity even in such a critical time.”

Without naming any political party, Modi said he “silently suffered” the allegations because it was not the time to indulge in ugly spats.

“India will not forget those distasteful comments and accusations after the Pulwama attack. I felt deeply wounded in my heart for my brave soldiers who had laid down their lives. But today, there has come news from the neighboring country, which has fully exposed those divisive forces who questioned the Pulwama attack,” he said.

He cautioned the people against such forces. “Don’t play into the hands of such opportunistic politics and become pawns in their hands. We can only develop India if we thwart such forces.”

He also briefly referred to the abrogation of Article 370 and said that in the last one year, Kashmir has fully joined India in development.

India has for long been suffering terrorism and losing “brave soldiers and innocent citizens”. It has always given a firm reply to terrorism, but it is time for the world to unite against it. “Many forces dislike our unity and want to turn our diversity into our weaknesses. We must identify these forces,” he said.

Advocating self-reliance, he said “India is now moving towards becoming atmanirbhar in the area of defense as well. “We have kept a hawk-eyed vigil on our borders. No one can intrude or cast an evil eye on our country. The brave soldiers have been fully empowered to give a befitting reply to any intruders for the protection of pride and sovereignty of the country.”

Despite challenges, India is fast building roads and tunnels in the borders areas, he added.

This was the PM’s first visit to Gujarat since the Covid-19-induced lockdown imposed in March 2020. During the two-day visit, he paid tributes to the late former CM Keshubhai Patel who had passed away on Thursday.

Modi also participated in some other events.