Roving Periscope: Farooq at it again…now ‘invokes’ China in J&K!

New Delhi: Out of his business, that is politics, for well over 16 months, former Jammu and Kashmir (J&K) Chief Minister Dr. Farooq Abdullah is fervently trying to stay relevant in the border state he once ruled like an Emperor. And in this quest, he has not refrained from injecting a new and dangerous element: China.

And he kept it a secret what China is doing unto its own Muslims, particularly in Xinjiang!

But things have changed beyond recognition since. Even the Muslim Ummah is now fast disintegrating into the Arab and non-Arab camps. Two Arab nations–the UAE and Bahrain–have learned to live peacefully with Israel; and Saudi Arabis is inching closer to the Jewish state.

The whole narrative has undergone a transformation. New normals have emerged. Perspectives have changed.

But Dr, Abdullah is old-fashioned. Frustrated politicians usually play this zero-sum game: they indirectly invite an outsider to intervene in domestic trouble—until they realize that the outsider has replaced the insider! Alas, China itself is trying to remain relevant in Ladakh!

One of the most colorful politicians of India—Yes, he has been taking long breaks in London even as the CM—Dr. Abdullah, 83, has just said that the Kashmiris—he did not exclude himself!—no longer feel to be Indian. And that they would rather be ruled by the Chinese!

“At this moment, the Kashmiri people do not feel and do not want to be Indian…they would rather be ruled by the Chinese,” he was reported to have told a section of anti-Indian ‘secular’ media which is trying to resurrect political fossils of the state.

Dr. Abdullah, who many know has been part of the problem rather than a solution, also described the Kashmiris as “slaves, who were being treated like second-class citizens.”

He rubbished the relative peace in Jammu and Kashmir after the August 5, 2019 change-of-status and claimed that “tens of lakhs” will hit the streets if the army were withdrawn.

Here, he looked like echoing the words of All India Majlis-e-Ittehadul Muslimeen (AIMIM) leader Akbaruddin Owaisi who famously said a couple of years ago that the Hyderabadis would show their real might if the police were withdrawn “for 15 minutes.”

Now that Pakistan has turned from their dreamland into a global nightmare, a failed state, and a basket case, what best can Dr Abdullah do? Invoke Pakistan’s ‘all-weather’ friend China as the next best savior!

Do not be surprised if the Owaisis, too, echoes the same sentiment in the near future.

Of course, for the record, and to somehow remain in their now dead political business, the Abdullahs, the Muftis, and the Owaisis have been routinely taking oath by the very Constitution they would like to junk at the first available opportunity. They have all been making the right noises about the judiciary, heading local political outfits sitting on the fence, and claiming to be ‘pro-India’.

Time and again, however, they suffer from a wardrobe malfunction and unintentionally show their scratched skin. Dr. Abdullah, for instance, said the new domicile law is intended to flood the Kashmir Valley with the Hindus and create a Hindu majority. “This has further embittered the Kashmiri people.” If you are a true lover of India and the Constitution, why this discrimination between the Hindus and Muslim demographics?

That is, he wants to maintain the status quo and Kashmir to remain a Muslim-majority state where he could run his and his dynasty’s political business the way his own father did. His son, Omar, is also apprehensive of the fate of his dynasty and spoken likewise—having grown a long beard, he is trying to be even more politically correct than his father!

Peeved no end at how the Narendra Modi government changed the fortunes of Jammu and Kashmir and Ladakh in just a year, the Abdullah Senior said the people in the state were “deeply disillusioned”. “They had no trust in the Central government.” And, here lies the lie: “The trust that once bound Kashmir to the rest of the country has completely snapped.”

In particular, Dr. Abdullah is aghast that the Prime Minister did not even give him a hint about the impending changes when he last met him just 72 hours before August 5, 2019, when the constitutional changes in the state were announced.

But he still believes that, after some eight months of detention, the standing his National Conference (NC) and the People’s Democratic Party (PDP) has been ‘considerably restored’ in the Kashmiri eyes. “People now realize that we are not ‘servants of India’!” 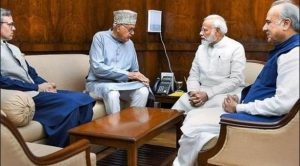 Last word: Dr. Abdullah said that, in the greater interest of Kashmir, the Muftis and the Abdullah families have buried their past differences and come together. Mehbooba Mufti is now ‘politically close’ to the two Abdullahs!