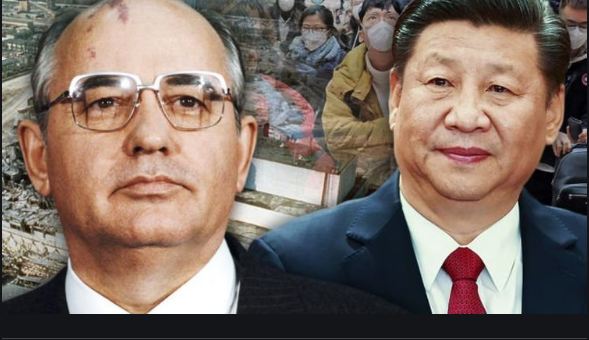 New Delhi: The famous Murphy’s Law teaches us that ‘If anything can go wrong, it will.”

Nothing elaborates it the way the dismantling of the Soviet Union in the late 1990s, or the ongoing rumblings in the People’s Republic of China do.

When Mikhail Gorbachev launched his twin reforms—glasnost (political openness) and perestroika (economic reconstruction)—in the Communist dictatorship of the Soviet Union in the 1980s-1990s, he did not, perhaps, realize that these were not exclusive of one another. Moscow focused only on democracy, paying no attention to economic reforms. It was unaware that there could be no successful political reforms (democracy) without all-encompassing economic reforms (prosperity). In the absence of one, the other cripples the nation.

That was why glasnost, sans perestroika, dismantled the Soviet Union.

Another archaic dictatorship, PRC, half-learned from this example. Its post-Mao Zedong leadership—Den Xiaoping to Xi Jinping—believed that they could offer perestroika without giving glasnost to the masses.

Instead of giving a vibrant democracy to the Chinese masses, the Communist dinosaurs of Beijing made them relatively richer with a dream: go out to colonize the world!

The way Joseph Stalin superimposed Russian nationalism on the aims of global Communism during the Second World War, China also superimposed its ultranationalist-medieval geopolitical concept of being the “Middle Kingdom” for its economic-militarist expansionist aims under the guise of the USD 200 billion Border Road Initiative (BRI) to colonize several Asian, African and other countries.

When caught red-handed as the source of COVID-19, which killed or maimed millions across the world, Beijing tried to divert attention to trumped-up territorial disputes with India and other countries. That is, to camouflage its failure to bring about democracy within, China tried to fan xenophobia to divert the attention of the Chinese outside the country.

Officially, China is putting a brace face globally and haranguing all and sundry. Its sociologist Dr. Li Yi claimed that China is driving America to its death. “COVID-19 has been”, he said, “beneficial for China and North Korea. There will be no US-China war. But we will take over Taiwan.”

So self-righteous has China become that even its Ambassador to the UN openly displayed arrogance against his departing German counterpart.

When Christoff Heusgen urged Beijing to respect human rights and release two Canadians arrested in December 2018 on charges of espionage, Chinese envoy Geng Shuang chided him, saying it was a “good riddance” for the UN Security Council that the 65-year-old German envoy was retiring!

Despite this bravado, the perils of perestroika, in the absence of glasnost, are emerging not only in Xinjiang, Tibet, or Inner Mongolia but also in the newly-rich “capitalist” class in the “Communist” China. Together, these point to a rising rebellion against the dictatorial regime which may dynamite the Communist regime anytime.

In this gigantic churning, China’s most famous entrepreneur Jack Ma appears to be stepping into the shoes of Boris Yeltsin of Russia in the 1990s.

A couple of months ago, Ma, co-founder of e-commerce behemoth Alibaba Group Holding Ltd, questioned the Chinese government’s policies at a Shanghai conference. At that time, he was about to pull off an unprecedented USD 35 billion initial public offerings for the finance juggernaut he had co-founded nearly two decades earlier.

His Ant Group Company’s listing would have valued the firm at more than USD 300 billion and swell Ma’s own fortune beyond a USD 61 billion fortune.

In the middle of this preparation, a flamboyant Ma told the audience that day at the Bund Summit that he felt this was a “most critical” moment in the development of finance. Then, for 20-minutes, he condemned anachronistic government regulations that would suffocate innovation in China.

This alarmed Beijing which lost no time in striking back at Ma.

Since September, China’s government has launched a coordinated regulatory crackdown, which in November scuttled the Ant public offering and, together with tough new antitrust rules, triggered about a $140 billion, or 17 percent decline in the market value of Ma’s Alibaba, media reported.

After this, Ma almost vanished from public view. In early December, with his empire under regulatory scrutiny, the government advised Ma to ‘behave and stay in the country’. This public rebuke is a warning that Beijing could soon go hammer and tongs against technology czars, increasingly perceived as a threat to the political stability of the Communist regime led by its President-for-Life Xi Jinping.

Why have Ma and other billionaires become suspects in the Communist regime’s eyes? Once hailed as drivers of economic prosperity and symbols of China’s technological prowess, the empires built by Ma, Tencent Holdings Ltd.’s chairman, “Pony” Ma Huateng, and other tycoons are now suspected of enrolling hundreds of millions of favorable users and gaining influence over almost every aspect of daily life in China.

That was why China sought to arm-twist these “capitalists” it now saw as dangerous. First came the suspension of the world’s largest IPO that Ma had planned. Beijing’s late-night announcement on November 3 stunned financiers from Shanghai and London to New York. A week later the antitrust authority unveiled anti-monopoly rules, as a veiled warning to Ma and others to tuck the tails.

In December, the Chinese Communist Party’s Politburo emphasized the need for stronger antitrust oversight and to prevent the “disorderly expansion of capital”, in a signal that private enterprises can expect stricter controls.

But Ma is not alone. Other successful entrepreneurs like Tencent’s Pony Ma, ByteDance Ltd. founder Zhang Yiming, and Meituan’s Wang Xing are also emerging in the league of rebels.

And they all draw sustenance from democracy-warriors of Tibet, Xinjiang, and Hong Kong, besides Taiwan.