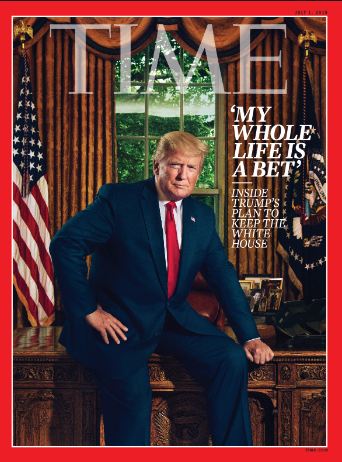 Roving Periscope: Trump may launch campaign in Jan to return in 2024!

Roving Periscope: Trump may launch campaign in Jan to return in 2024!

New Delhi: Seeing writings on the wall, despite his fresh claims of a “voter fraud” halting his second term, outgoing US President Donald Trump has promised America that he will return to the White House in 2024.

The White House has begun preparation to welcome President-elect Joe Biden next month.

Trump’s successor and the 46th US President, Joe Biden, will take the oath of office on January 20, 2021, the day Trump may even launch his campaign to return to the office in 2024.

For now, however, the situation is different.

One by one, Trump’s trusted lieutenants have left him to fend for himself. He finds himself increasingly isolated. His quest to overturn Democrat rival Joe Biden’s election victory has crashed, as courts rejected his assertions. And now he is openly musing about a second run at the US presidency in 2024.

“It’s been an amazing four years. We are trying to do another four years. Otherwise, I’ll see you in four years,” he told a gathering at a White House Christmas party on Tuesday.

The event was attended by many Republican Party lawmakers and it was closed to the media. But a video of Trump’s speech went viral.

Even a month after the November 3 election, Trump refuses to concede defeat to Biden who is building his incoming administration.

Almost confined to the White House, Trump has restricted his public appearances to the bare minimum. But he is apparently venting his frustration through furious tweets about the alleged election fraud, which his own attorney general rejects.

“To date, we have not seen fraud on a scale that could have affected a different outcome in the election,” Bill Barr, a staunch Trump ally, said on Tuesday.

But Trump is still irrepressible.

According to NBC News, he has recently discussed with his acolytes the possibility of launching his 2024 campaign on January 20, 2021, itself, the Biden Presidency’s Inauguration Day, which the Republicans are not keen to attend.

Trump also has precedence. Somewhat superstitious, he had filed the paperwork for his 2020 campaign on January 20, 2017, the day he took the oath of office.

If he launches the ‘Trump 2024’ campaign next month, it could potentially help him grab the center-stage. But he may face obstacles as well, even within the Republican Party.

Biden has won a record over 81 million votes as against Trump’s 74 million. On a nationwide basis by percentage, Trump got less than 47 percent of the ballots cast.

Theoretically, he can contest the 2024 polls as nothing prevents him from trying again then. The US Constitution prevents anyone from serving more than two full consecutive terms in the White House, but non-consecutive terms are possible.

Apparently, Trump wants to emulate him.

Elected for the first time in 1884, Cleveland’s re-election bid failed in 1888, but four years later, he won again. It made him both the 22nd and the 24th president of the United States.

But there is a difference also.

Cleveland was 56 at the start of his second term. Trump would be 78 — the same age as Biden is now.

But Trump is a highly successful businessman. Trust him to spring a last-minute surprise as well.