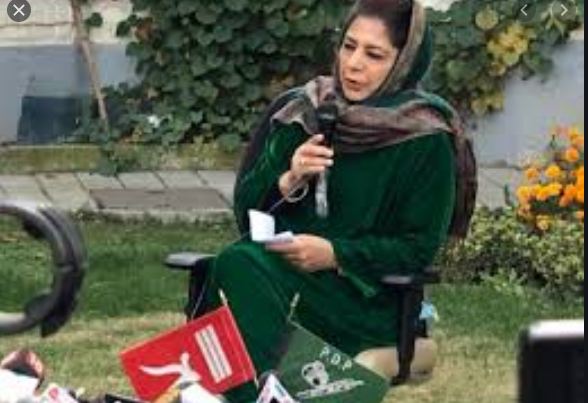 Sholay: Now, Mehbooba wants India to be run by the Constitution!

Sholay: Now, Mehbooba wants India to be run by the Constitution!

New Delhi: Trying to reload her relevance in Jammu and Kashmir politics 14 months after her release from detention, former Chief Minister Mehbooba Mufti expressed her latest opinion on Friday that India can only be run by the Constitution.

“The country will run on the Constitution, not on the BJP’s manifesto”, she tried to assert at her first press conference in Srinagar since August 2019 when Parliament had amended the same Constitution abrogating Article 370 and scrapped the “special status” the border state was accorded earlier.

Attempting to revive her rage, the People’s Democratic Party (PDP) chief Mehbooba Mufti claimed that the BJP had “desecrated” the Constitution and vowed not only to restore Article 370 but also to bring about a “final solution” to the Kashmir issue.

Trying to relaunch her dead career, she pre-launched a scathing attack on the BJP, and also instigate the state’s people. “The people of J&K are expendable to them (the Centre). What they want is our territory,” she said from the safety of her Gupkar residence.

For photo-effect, she addressed the media with the flag of erstwhile J&K state in front of her. “My flag is this (pointing to the J&K flag on the table). When this flag comes back, we’ll raise that flag (the Tricolour) too. Until we get our own flag back, we won’t raise any other flag…This flag forged our relationship with that flag.”

“Our relationship with the flag of this country is not independent of this flag (Jammu and Kashmir’s flag). When this flag comes in our hand, we will raise that flag too,” according to media reports.

She conveniently forgot that the Constitution was trampled upon and bent by her father, Union Home Minister Mufti Mohammad Saeed, who had allegedly blackmailed the then Prime Minister Vishwanath Pratap Singh to order the release of separatist militant Yasin Malik in 1989 so as to get his daughter Rubia Saeed released from abduction.

It was then that Pakistan-backed and financed terrorists tasted blood and forced the Centre to bend the Constitution at will, massacred thousands of Hindus and soldiers, evicted millions of Kashmiri Pandits, and changed demography—all as part of their grand strategy to merge the state with Pakistan.

However, with Prime Minister Narendra Modi at the helm, the separatists and their camouflaged political supporters like the Muftis and the Abdullahs have lost their bargaining capacity. Their corrupt practices and links with terrorists and Pakistan have now come to haunt them. The BJP had finally called their bluff and blackmail and that of the Congress and its secular gang as well.

Hence their Sholays: Dr. Farooq Abdullah threatening to invite China for the restoration of Article 370, and Mehbooba threatening with “final solution”.

After being released from detention, Mehbooba had, in an audio message posted on Twitter, said the people of J&K cannot forget the “robbery and humiliation” of August 5, 2019.

“Now, all of us have to reiterate, we will have to take back what New Delhi snatched from us illegally, undemocratically, and unconstitutionally. In addition to this, we will have to continue our struggle for the resolution of the Kashmir issue for which thousands of people sacrificed their lives. I agree that this path would not be easy but I have the belief that our courage and our determination will help us to cross this road,” she had said.