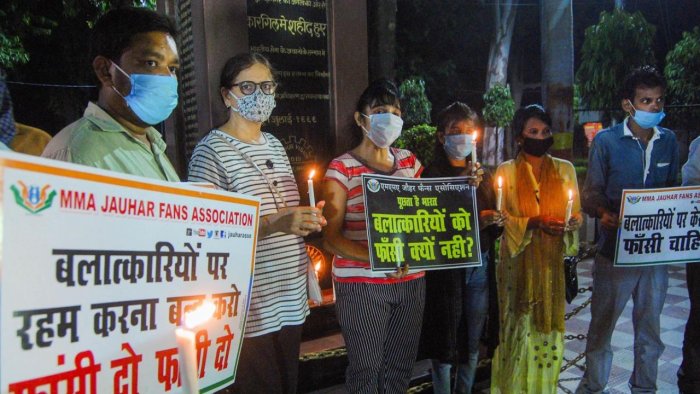 NEW DELHI, Oct 3: With the behavior of the Hathras police with the family of the dalit rape victim evoking nation-wide condemnation almost of the level of Nirbhaya rape and murder, the Uttar Pradesh government demonstrated a marked come down on Saturday permitting the media to enter the village and talk to the victim’s family.

Later the police also allowed a Congress delegation led by the former president Rahul Gandhi and his sister and party general secretary Priyanka Gandhi to meet the dalit family. It was their second attempt to enter the village after being denied permission on Thursday when the police also allegedly manhandled Rahul and put the duo under arrest for attempting to violate section 144 in force and allegedly dishonouring COVID-19 regulations of maintaining social distances.

Following large-scale criticism even from within the ruling BJP and some of the alliance partners of the NDA, the UP chief minister Yogi Adityanath has appointed a three-member Special Investigation Team to probe into the gang-rape of the 19-year old dalit woman and burning of her body in the dead of the night by the Hathras police and other officials without the knowledge of the victim’s family members. He has also ordered the suspension of all the key police and government officials in Hathras connected with the incident and accepted the suggestions of the SIT to send for narco test to all the concerned police and government officials to establish the truth in the case.

Media which was completely barred from entering the village was for the first time on Saturday allowed to meet the victims’ family. Talking to media after two days, the 19-year-old victim’s family questioned hurried cremation by the government. “We want to know whose body was burnt on that day. And if it was our sister’s body then why did they burn her (the body) in this manner? All of us requested the police and the administration to allow us to see her one last time,” said the victim’s brother after the media was allowed in the village and to speak with the victim’s family.

The media sources said some of the victims’ family members were threatened with dire consequences by the Hathras police if they attempted to talk to the media and questioned burning the body. The family members were told that they were not being shown the body only because after the post-mortem the body was in such a state that if they see it they would get terrible shock and would not be able to consume food for 10 days. “How can the police decide it and refuse us the opportunity to see the body of our deer one the last time?” the family members asked.

In a bid to cover some lost grounds, the chief minister also rushed some top government to Hathras to meet the family members of 19-year-old Dalit woman who was allegedly gang-raped and assaulted by four men on September 14.

Later, Rahul Gandhi and his sister Priyanka Gandhi were also allowed to travel to Hathras to visit the victim’s family after being stopped briefly at Delhi-Noida border. The leaders, accompanied by former Member of Parliament Deepender Singh Hooda and other Congress workers, were permitted to cross the Delhi-UP border by the UP police.

Noida Commissioner of Police Alok Singh said, citing Section 144, that a maximum of seven people, including the Gandhis, would be allowed to cross the border. He asked the rest of the Congress workers to return.

Police resorted to lathi charge to disperse the crowd from Delhi-Noida Direct (DND) flyway toll plaza. The DND plaza is yet to open for general traffic.

The police had made heavy bandobust on the Delhi-UP border in Noida ahead of the scheduled visit of the Congress delegation to meet the family in Hathras. Barricades were installed at the DND flyway where scores of policemen, including senior officers, were present even section 144 remained in force in UP’s Gautam Buddh Nagar.

Meanwhile, West Bengal CM Mamata Banerjee took out a rally in Kolkata in protest against alleged gang-rape and assault of the Hathras victim. In Agra, scores of Valmiki community members who were protesting against the Hathras incident clashed with the police. The protesters also pelted stones at the policemen and official vehicles.