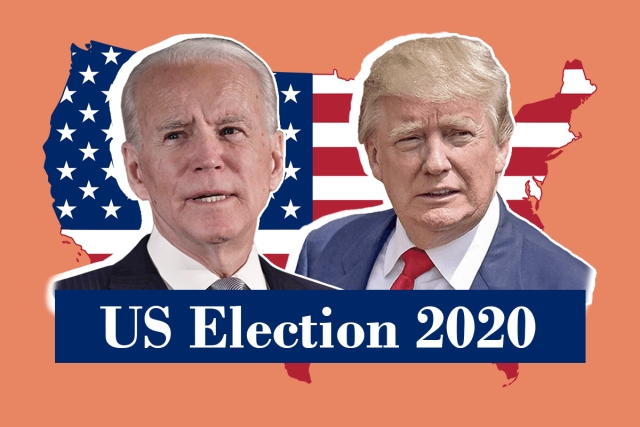 NEW DELHI, Nov 4: The US president Donald Trump has already won in the Florida and Iowa states but the race is turning tough in the Northern battleground states — Wisconsin, Michigan and Pennsylvania.

Some states in the US had allowed voters to vote by mail and that includes Pennsylvania, where ballots postmarked by November 3 can be accepted if they arrive up to three days after the election. Democrats typically outperform Republicans in mail voting, while the Republicans look to make up ground in Election Day turnout.

Trump accused Joe Biden over campaign fraud and Biden’s campaign manager said “It has legal teams standing by if Trump follows through with his threat to move court to stop the counting of votes.”

Trump even before the counting of votes completed and without the results to back up his claims, has declared himself “elected” and called the counting of mail-in votes “a fraud on the people of the US.” Trump said: “We were getting ready to win this election. Frankly, we did win this election.” The President called the process of counting mail-in ballots a fraud and alleged that the Democratic Party was trying to steal the election. He pledged to fight the results of the election in the Supreme Court. “We will be going to the US supreme court. We want all voting to stop,” Trump said.

Earlier, Democratic presidential candidate Joe Biden delivered his brief remarks to an enthusiastic crowd of supporters in Delaware. Biden said he felt confident about winning Arizona, Michigan, Wisconsin and Pennsylvania, arguing that “it ain’t over until every vote is counted, until every ballot is counted.”

On the allegations of Donald Trump – Biden campaign manager Jen O’Malley Dillon said, “If the president makes good on his threat to go to court to try to prevent the proper tabulation of votes, we have legal teams standing by ready to deploy to resist that effort”

The latest tally of early voting in the US shows that almost 102 million Americans cast their votes before Election Day, an eye-popping total that represents 73 votes of the total turnout of the 2016 presidential election. Early voting — whether in person or by mail-in or absentee ballot — has swelled during the Covid-19 pandemic as voters have sought the safety and convenience it offers. The greatest gains have been witnessed in Kentucky where almost 13 times as many voters cast their ballots early as in 2016.

The most important thing is that the mail in ballots could take a few days or weeks to count in some states and a winner might not be officially declared till the last vote is counted.